Our Review: Scroll Down Anyone who has ever studied literature will know all too well that even works universally agreed to be timeless classics don’t necessarily appeal to everyone in the general public. Such will doubtless be the case with SeaBed, a visual novel developed by Paleontology Soft and brought West by localisation specialists Fruitbat Factory. It’s an absolute masterpiece, but for every person who recognises it as such, several more are likely to bounce off it hard for one reason or another.

SeaBed is an NVL-style kinetic yuri mystery sound novel (trying saying that three times as fast). For those less familiar with visual novel vernacular, what this means is that the story is told through full pages of prose rather than dialogue boxes; there are absolutely no choices for the player to make whatsoever; the relationships in the game are exclusively female same-sex ones; the core narrative is based around strange happenings that are at least partly left up to the reader’s interpretation rather than being explained explicitly; and voice acting is eschewed completely in favour of descriptive prose, atmospheric music and evocative sound effects. Doubtless that description has already sent a few people walking away muttering something about wanting some actual “game” in their game, and that’s fine. What it’s worth remembering, though, is that rather than being a game genre, visual novels – whether they’re interactive or not – are best thought of as a storytelling medium like film, television, prose, poetry or theatre. They’re a means of delivering a story to an audience; nothing more, nothing less. Approach SeaBed with this in mind and a remarkable experience awaits.

SeaBed’s lengthy prologue establishes the mystery. We follow Sachiko, a woman in her late 20s, as she runs her successful but rather understaffed design company. We learn that Sachiko is struggling: she suffers from unpredictable but debilitating episodes where she suffers a horrendous ringing in her ears and that these incidents appear to be related to some sort of mental trauma she has suffered.

As the opening scenes progress, we learn that Sachiko used to be in a relationship with a woman named Takako. The pair had known one another since childhood, and had always done everything together; at some point along the way, they had developed their close friendship into a romantic relationship and together they had successfully ditched life as corporate drones, started their design company together, and begun living life the way they wanted to. But then Takako disappeared. Sachiko doesn’t know where, when, how or even why it happened, and she recognises that this is a problem – particularly as she frequently finds herself hallucinating that Takako is still there alongside her. It’s as she starts seeking some relief for what are apparently some deep mental wounds of unknown origin that the story proper gets underway, and from hereon we see what unfolds from three different perspectives: Sachiko’s, Takako’s, and that of Narasaki, the doctor from whom Sachiko seeks psychiatric treatment, and a mutual friend of the pair from their childhood.

SeaBed unfolds chaotically, like a dream. It frequently jumps back and forth between perspectives and even chronologically between scenes, and it’s clear from the very first time that Takako takes over narration duty from Sachiko that something isn’t quite right here. It’s not immediately apparent exactly what – though you may well have some suspicions – but it’s intriguing. And, as things continue, more and more questions start to present themselves, both as part of the main narrative and through the optional “Tips” side-stories that unlock as you progress. This is a story that will get you thinking, and thinking hard, even after it’s all over. One area where some prospective readers may find themselves struggling is the relatively slow pace of the action. SeaBed is a visual novel that makes good use of the verbose format for elaborate, evocative descriptions of characters’ surroundings, their inner feelings, the things they are doing… everything, really. It takes pride in gradually building its setting and characters a tiny, lovingly crafted piece at a time – and that means a lot of mundane, everyday conversations and scenes where some may feel that nothing of real importance is happening.

The age of the characters is relevant here, too; since most of the cast are pushing 30 and some are older still, there’s no energetic, wacky anime hijinks here, despite the art style. This is a contemplative, peaceful, oddly relaxing yet nonetheless slightly unsettling experience in which you never quite feel able to count on anything being exactly what it seems to be. It’s far from morose, however; there are plenty of scenes featuring amusing, witty dialogue between characters – anything involving Takako or Nanae, a character introduced partway through Sachiko’s part of the narrative, is always a particular highlight in this regard. On the presentation front, SeaBed has a clear, distinctive sense of style so far as its characters are concerned, featuring a pleasingly rough, sketch-like feel to their design. The background art is a touch on the inconsistent side, however, alternating between what appears to be photographs run through a simple “watercolour” filter and comparatively pin-sharp pre-rendered 3D backdrops – though there’s an argument to be made that the shifting level of clarity reflects the ever-changing nature of a dream. The music, meanwhile, complements the action well, with cheerful, energetic, modern numbers increasingly giving way to mournful solo piano melodies as the narrative progresses and certain things start falling into place for the reader.

The centrepiece of any visual novel is always the writing, though. So long as the reader has the patience and the attention span to contend with the rather sedate pace of the whole experience – not to mention its substantial length, clocking in at 15-20 hours or more, depending on one’s own personal reading speed – SeaBed certainly delivers on that front, providing a compelling tale that stirs the imagination and serves as a fascinating exploration of loss, grief and the mental health matters that surround such things.

SeaBed is a beautiful, emotional work of digital literature that won’t be to everyone’s taste, but come in with the appropriate expectations and there’s a true masterpiece of the visual novel medium waiting to be enjoyed here.

Sure, I'll bite. I think I'll wait until it goes on sale though, $20 is a bit out of my price range for VNs right now.

@Cevil I thought you fools all died out in the 80s?!

Also it's just a romance game, no mention of gay rights so even if your opinion wasn't idiotic, you'd be wrong about it being propaganda in this case

@Cevil are u ok bro

Yeah, i'll wait for a price drop too
I find that Vn's tend to be a bit overpriced for what amounts to a slightly animated graphic novel with branching paths.

@KitsuneNight completely agreed. Not to mention I'm a designated "essential employee," so I've barely got time to play regular games. If I do any reading it's going to be on my phone while on lunch break.

@Cevil
It's funny how the game is more about loss, dreams, and the longing for another, but because it features two women instead of a man and a woman, it's instantly "gay propaganda" no matter what.

Sounds different from what I expected (thought more traditional VN) but that ain't a bad thing. I'm still down for more yuri goodness and there is a physical version at Play-Asia which I am nabbing.

For those wanting a traditional yuri VN then Yumeutsutsu comes out a bit later this year.

"But...but...but ANIME GIRLS!!!!!! AND 2 K*SSING PEOPLE OF SAME GENDER!!!!!!! CRIIIIIINGE!!!!" Ok but fr though, this does look interesting, but definitely gonna wait till it's cheaper.
Also what did that cevil guy?

To those waiting your not going to get it on sale. You will be buying at eBay Scalpers prices and those aren't sale prices. This isn't some retail store release that I seen so far.

It's on the Eshop.

I'm waiting for a price drop on there.

Edit: in fact i got it wishlisted there before I saw the review

@SwitchForce What on earth are you talking about? Eshop titles go on sale all the time.

@KitsuneNight It'd have to be a big name VN like Fate/Danganronpa/999 for me to fork out something like $40. I could probably do $20 if someone I knew IRL recommended it to me, but otherwise I'm too short on money to spend it on something I'm only going to read once.

@kenyowa You wouldn't pay 40 dollars for a VN outside bigger names? Given the length of quite a few of them (20+ hours) at that price range I'd personally say that's really good value even at 1 playthrough.

Being short on money I can certainly understand though.

I wouldn't no.
Especially not because I never played any of the "big names" so they are an inherent risk for me.

I am also used too-spoiled by Steam And Humble Bundle sales.

Interesting... Cevil's comment seems to have made the people who would usually chastise male gaze games to do a U turn and support it, instead.

Animal crossing has me under its thumb but I shall get this next week.

It's hard to find time for all these VNs but I might have to grab the physical copy of this one too.

If wondering, He called the game "gay propaganda".

I’m intrigued, but a few VNs on my backlog already 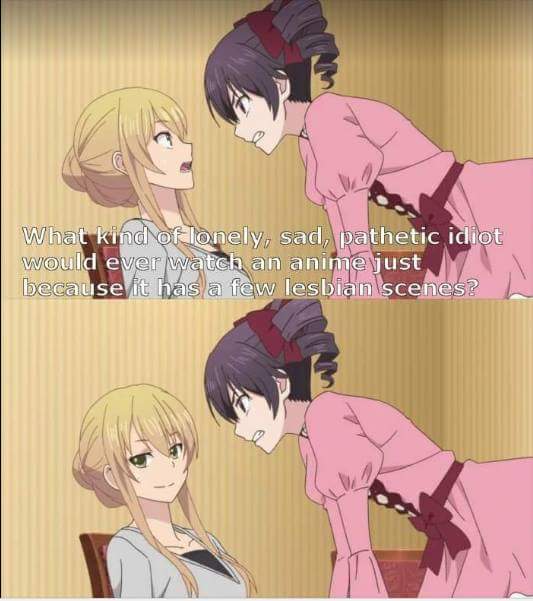 I don’t mind reading, but I might wait on a sale just because my backlog is a nightmare right now (but with the current situation I’m making some progress through it, at least).

This sounds pretty interesting. I've been wanting more anime and VNs featured around adult characters anyway. There's only so much you can do with the usual teenage drama or coming of age stories before it gets way too silly.

But with a slightly older cast, you have room for a very different story.

Wow, this review makes me want to buy the physical version from Playasia.

Is there touchscreen functionality when playing handheld? Great review btw

This was free on itch.io a few days ago.

@KitsuneNight very true! What I mean is I have a pile of VNs that I’ll probably want to play before I get to this, so I can wait for a sale.

Any ones you'd recommend ?

@KitsuneNight I’m new to the genre so the ones I’m working through are too obvious to need recommending. I’m trying the ‘classics’ first like Danganronpa, Zero Escape.

Probably better if you had some recommendations for me?

You mean the FOURTH picture if you scroll down ?
Cause that's immediately apparantly

@KitsuneNight Second edit: the order of the images appears to be totally random. This time the top image was of two little girls in bed together... yeah, pedo-bait, NintendoLife promoted pedo-bait after Nintendo released it. Very disappointing.

Well i liked One Way Ticket and Little Briar Rose.
They say Nekopara is good but I can't confirm that

@KitsuneNight thanks, much appreciated I’ll check them out!

If you have a PC there are some quite good ones on PC
Doki Doki Literature club.
The Sad Story of Emmeline Burns.
Gone Home.
Dear Esther.
Vampire Coteries of New York ( also on the NX but its 20 bucks a pop that one )